Midwest 3 Tour Kicks Off This Friday

Posted by Big League Tours on Wed, Nov 23, 2011 @ 02:15 AM
August 3, 2010 - Where has the summer gone? I can't believe that the last of our small group tours is going to kick off this Friday. It should be a fantastic trip. We'll start in Detroit on Friday, catching the Angels at Comerica Park against the Tigers. We'll then load up the bus on Saturday and make our way to Cleveland. Once in Cleveland we'll take a private stadium tour of Progressive Field before seeing the division rivalry of the Twins and the Indians.

on game between the Rockies and Pirates. For our travelers who haven't been to this stadium, it's a fantastic place to catch a game, especially a day game with the view of the river, bridges and downtown Pittsburgh as the backdrop. After the game, the group will make its way to Cincinnati for the next two nights.

Monday will be the perfect ending to the tour. We'll take a tour of Great American Ball Park and be joined by Mr. Dave Parker. As most of you will recall, The Cobra was the MVP in 1978, appeared in six All Star Games, won three Gold Glove Awards, and was an instrumental member of the 1979 World Series Championship team with the Pittsburgh Pirates. Cobra will share stories from his playing days, talk baseball with our guests, and take pictures with the group. Here's a picture from his appearance with our group in 2008. Looks like he could still play, doesn't it?

We'll finish the tour with the heated division rivalry between the Cardinals and the Reds with a game and series that couldn't be hotter or mean more for these two teams.

Stay posted for up to the minute posts from the final tour of our 2010 sports travel packages.
0 Comments Click here to read/write comments

April 8, 2008 - While we were taking the escorted tour of Coors Field, we had an unexpected thing happen. As we passed by the doors that led to the Rockies' clubhouse, we ran into Manny

Corpas. Manny is the closer who had a phenomenal run at the end of last year.

Manny motioned for my son, Hiatt, to follow him into the clubhouse area and then gave him a personal tour of the clubhouse, the weight room, training room and cafeteria. The tour guides told us that this never happens which made it all the more special for Hiatt. Can you imagine being 10 years old and getting a personal tour from an MLB player? I would have been as excited at 40!

We've taken many baseball stadium tours but this one will stand out in our memories for a long time...Our thanks to Manny for going out of his way to make that stadium tour special for a young baseball fan. You instantly made him a Rockies fan and a personal fan for life. Thanks so much!!!

Posted by Big League Tours on Thu, Nov 17, 2011 @ 11:00 AM
April 6, 2008 - Yesterday we took the stadium tour of Coors Field. It's a great ballpark with a lot of interesting features. Since it was a game day, we started the tour on the field which is usually the last stop. Here's our group and guide just outside the Rockies dugout. 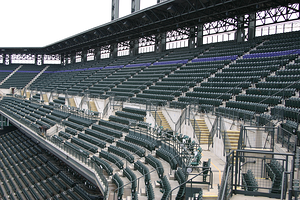 Another interesting stop was in the press box. These guys not only have one of the best jobs in the world, but they also get the best seats in the house. Our guide pointed out that a fresh hole in the wall had been made from a Garrett Atkins foul ball during the Friday season home opener. It was marked with the date and his name so that they could remember all of them by the end of the season.

The guides were great and allowed us to take our time for many pictures and questions. We've been on many tours where they herd you through the park at break-neck speeds without your chance to really enjoy the moment.
0 Comments Click here to read/write comments

Today we're off for a baseball stadium tour to see all the behind the scenes elements of the ballpark. Tonight's game is set to feature Jeff Francis for the Rockies and Brandon Webb for the Diamondbacks. Should be exciting. Then again...a day at the ballpark is always better than sorting out an inbox...
0 Comments Click here to read/write comments

Posted by Big League Tours on Thu, Nov 17, 2011 @ 09:00 AM
April 5, 2008 - We arrived in Denver on Thursday for a small group tour. It's the first package trip that we're offering through Big League Tours this year. The weather was a bit chilly and was spitting a light rain and snow mix as we walked around downtown. It warmed up in the evening and, although over cast, it was still pretty nice.

One of the first things we noticed was 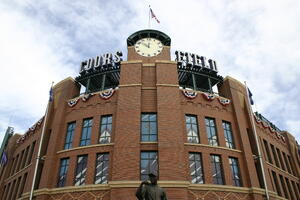 that fans in this town were ready for baseball. And why shouldn't they be? The Rox played so well the end of 2007 and made a fantastic playoff run. Expectations are pretty high for this season. Everywhere we went there were signs up welcoming Rockies fans for the 2008 Home Opener.

While some people were clinging to the last days of the winter by heading into the mountains for one last ski session, many were embracing the beginning of spring by donning their baseball jerseys and caps and heading to the ballpark. (I tend to relate to the latter group...)

After dinner at Wynkoop's by Coors Field (buffalo, anyone?), we settled in for the evening getting ready for tomorrow's excitement.
0 Comments Click here to read/write comments