Since joining the Big League Tours crew in early summer, I've had the amazing opportunity to lead two tours. The first time I was the co-pilot with Martha Ellen in Chicago/Milwaukee and the second I was flying solo with the group in New York, Boston and Cooperstown.

As the 2012 MLB season wraps up, I thought this would be a great time to share some of my favorite pictures from the trips this summer (I also threw in a few from the corporate outing we hosted). My iPhone is my best friend and I love snapping shots of absolutely anything and everything! FYI- My iPhone is far from professional so ignore some of the blurry stuff and just imagine the great times everyone was having!

Join me while I recount the amazing people I've met and wonderful places I've been thanks to Big League Tours.

There will be plenty of photos to come next year so stay tuned, hopefully your face will even be featured in a few! Sign up for our 2013 Tours and be the first to recieve the schedule once it's released!

We have had a great response to all of our 2012 baseball vacation packages. In particular, our Chicago/Milwaukee and Midwest Tour 1 packages are filling up fast. 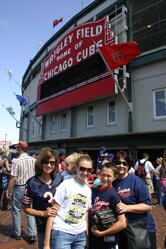 As you probably understand, our tours aren’t like other baseball tours. We provide lower level seats, first class hotels, sensible itineraries, and an MLB player experience. In order to do all those things, we have to keep our groups small. If you are interested in joining us on any of our 2012 tours (especially the Midwest 1 or Chicago/Milwaukee), please book early, so you don’t miss out.

Our Midwest Tour 1 will start in Minneapolis with the Twins hosting the Royals at Target Field. The next day, our guests will fly to Chicago where they will settle into our downtown hotel for 4 nights. (We’re not cramming a bus full and driving 7+ hours like other tours might.) From there, we’ll head out to Wrigley Field for a Cubs game. Then take a trip to Milwaukee’s Miller Park to see the Brewers the next day returning to Chicago after the game. And, on our last Chicago day, visit US Cellular Field to catch the White Sox. The next morning we’ll fly to St. Louis for a game on July 4 at Busch Stadium and spend the evening in the Gateway City.

The shorter version of the Midwest Tour 1 is the Chicago/Milwaukee Tour. Our guests will come into Chicago on June 30 and stay for 4 nights. While there, they will join up with our Midwest Tour 1 group and visit Wrigley Field, Miller Park and US Cellular Field.

Let us know if you would like to book either of these tours. Or, you can click this link to reserve your spot: Purchase a Big League Tour

Have You Covered the Bases for Dad and Father's Day?

Posted by Big League Tours on Wed, Nov 23, 2011 @ 10:15 AM
Wouldn't Dad love a luxury baseball tour from Big League Tours this year?  It's a great vacation for the whole family, or the perfect father/son-daughter trip.  There are several MLB tours still available for the 2011 season.  Just click on a link below to see all the info.

Escorted tours make great gifts for baseball fans. Check out the tours still available and give Dad a gift that he'll remember for a lifetime!!
0 Comments Click here to read/write comments

Race Between Reds and Brewers

Posted by Big League Tours on Wed, Nov 23, 2011 @ 08:30 AM
April 23, 2011 - While we're only 20 games into the 2011 season, we're seeing the Reds and Brewers atop the National League Central Division as predicted. Much can happen over the next 140 games, but we're counting on the race between the Reds and Brewers to remain strong and have some meaning late into the season.

Why? Because we have a great baseball tour planned in September for both Brewers and Reds fans. It's our Oktoberfest trip that will run from September 16th-18th. We'll be loading the busses in Milwaukee and making stops in Chicago and Indianapolis to pick up fans from both teams and fans of German brats and beer.

Check out this MLB road trip that will include tickets to three games, great hotel accommodations, special access at the Oktoberfest activities, special access to the ballpark, and a baseball stadium tour. It promises to be a great baseball vacation package with a number of extras included.
0 Comments Click here to read/write comments

exciting to check out a new baseball stadium. 2009 offered us two new parks in New York City with Citi Field and Yankee Stadium. 2010 will bring us an open air ballpark in a town that's grown accustomed to a dome.

Once there, we'll head to Wrigley Field to see the classic rivalry of the Cardinals and Cubs. You'll then have a free day to explore the city - take in a museum, shop till you drop, or hang out at your favorite places to eat (cheeburger cheeburger, anyone?). We'll wrap up this trip by visiting US Cellular to see Josh Hamilton and his Rangers take on the White Sox.

To see more about this and other MLB Tours being offered by Big League Tours, visit our website now to get all the details.

Posted by Big League Tours on Tue, Nov 22, 2011 @ 04:30 PM
July 24, 2009 - After a day of everyone being on their own - siteseeing, shopping, lounging around, whatever their hearts desired - we headed up to Miller Park in Milwaukee to see the Brewers take on the Braves. (Just a quick sidebar - I think all of the stimulus money has gone into construction between Chicago and Milwaukee...UGH!)

There was a threat of a thunderstorm that was supposed to arrive around 8PM so the roof was closed on the baseball stadium in anticipation of that. We've been to games at Miller Park where the roof was closed for batting practice and then opened for the game but this was our first visit where the roof stayed closed for the game. Here's a photo of the baseball stadium taken from our seats. Great place to see a game!

I really enjoy going up to Milwaukee. It's one of my favorite stops on our sports tours. The fans there have always had a good time. And now that the team has been playing well, they are equally into their Brewers as they are into their sausages and beer!

Wishing that we had kept score at the perfect game the previous day, we scored this game. No perfecto here, though. In fact, just the opposite - lots of offense from both sides. Click here to see the box scores and write up from the game.

Whether on a sports travel package or on your own, Miller Park is a great place to hit on a baseball travel tour.
0 Comments Click here to read/write comments

Posted by Big League Tours on Sat, Nov 19, 2011 @ 05:00 PM
Taking Baseball Travel Tours to Miller Park
August 9, 2008 - Whenever we book any of our MLB Tours to include Chicago and Milwaukee, we plan it to stay in Chicago the whole time and to take a bus up to Milwaukee and back on the same day. It works out great because we

don't have to move hotels and deal with getting situated a second time. Plus, it's only a 90 mile bus trip so it's an easy drive.

This escorted tour took us up to Miller Park with plenty of time to take in the sites of the stadium, batting practice, and of course, the tailgaters outside the stadium. Brewers fans know how to tailgate! We actually drove through a little rain on our trip up to the stadium. We didn't mind because we knew they would have the roof closed if it was bad outside. But shortly after batting practice, the skies cleared up and the sun came out so they opened

the roof. Here's a photo of the roof opening. I didn't time it from start to finish, mainly because I had my face buried in a bratwurst covered with sauerkraut and the secret sauce that they serve at Miller Park, but I'm guessing that it took about 10 minutes to open it up.

If you haven't been to Miller Park, you should consider adding it to your list of sports vacations stops to be made. You'll be glad that you did. Bring the farmer's golf set, beer, brats and a grill and you'll fit right in! Maybe Bernie will let you go down his slide!
0 Comments Click here to read/write comments

Posted by Big League Tours on Sat, Nov 19, 2011 @ 02:30 PM
Group Travel Tours Make Their Way To See The Brewers
August 19, 2008 - On Saturday the Big League Tours group headed out to Milwaukee for the day to see the Brewers take on the Washington Nationals.

list of things to do.  I'm not sure if I'm really a dome kind of person, but they make up for that in many other ways.  As our group tour made its way to the parking lot our guests were amazed with how many people were in the parking lot tailgating before the game.  Going to Milwaukee a couple of hours before the gates open is a great time everyone is barbecuing, playing yard games, etc. the usual tailgating lineup.

Miller Park is also a great place for family tours to go they have an amazing area for kids to play and burn off some energy before the game.  The Brewers had a perfect game where hey defeated the Nationals 6-0.  Ben Sheets pitched a complete game on Saturday giving the Brewers a lopsided victory.  To check out official scoring please click here.
0 Comments Click here to read/write comments

Posted by Big League Tours on Sat, Nov 19, 2011 @ 01:30 PM
Group Travel Tours by the Lake
August 8, 2008 - Each year, this is one of my favorite sports packages that we offer. We get to incorporate White Sox, Brewers and Cubs games all while staying in the heart of the Windy City.

This year, our package tour began at U.S. Cellular Field with our Big League Player Experience with Ron Kittle. Ron was the American League rookie of the year in 1983 and was a noted power hitter throughout his career. This Player Experience was held inside the ballpark before the gates opened up and in the Jim Beam club section. The fans traveling with us were able to listen to Ron share some stories about his career, ask him questions about the game, and watch the White Sox take batting practice from seats with a perfect view.

The game featured Mark Buerle pitching against Jon Lester and the World Champion Boston Red Sox. We had great seats as a group on the third base line between the dugout and home plate - an awesome place to watch a game. The White Sox were pleased to walk away with a victory with a 5-3 score. We headed back to the hotel with plans to head to Miller Park on Saturday.
0 Comments Click here to read/write comments