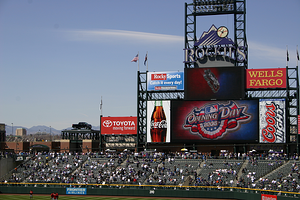 Today we're off for a baseball stadium tour to see all the behind the scenes elements of the ballpark. Tonight's game is set to feature Jeff Francis for the Rockies and Brandon Webb for the Diamondbacks. Should be exciting. Then again...a day at the ballpark is always better than sorting out an inbox...