Soak up the California Sun on our West Coast Tours

Our West Coast Tours are some of the most popular every year. In 2014, we are adding some new variations that include 3, 4, 7, & 8 night vacations, and we're offering them in two different months. You can select the Full West Coast Tour, the California Gold Tour, the Southern Cal Tour, or the Baseball on the Bay Tour. Below are the links to all of our tours out West next season. Don't forget- book by Dec. 15th and get 5% off. Use discount code EARLY when booking your tours.

Our West Coast Baseball Tour flew from San Francisco to Los Angeles. After 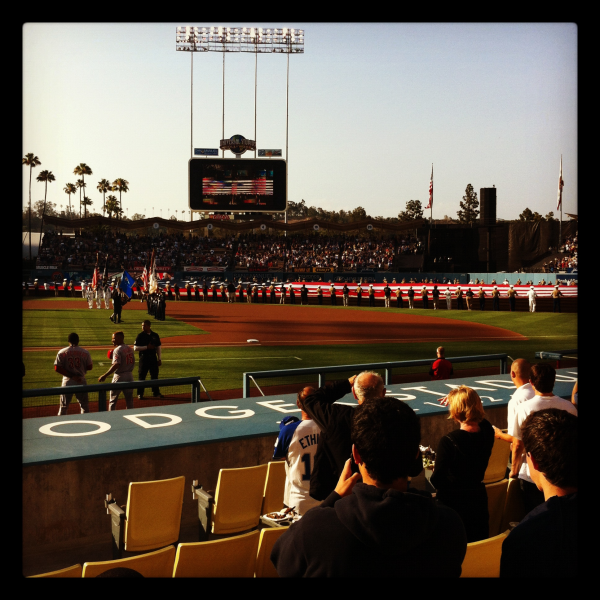 the travel day and free morning to explore LA on their own, our guests headed out to Dodger Stadium on July 4th to see the Dodgers host the Cincinnati Reds. Here's a view from our seats.

We started the night with a visit with Reds broadcaster andformer MLB pitcher, Chris Welsh. Chris hung out with us at field level and then took us up to the broadcast booth to see things from that vantage point. The booth is pretty small so we only went in three people at a time. Here's a shot of our three with Chris.

I would have to say the highlight for me, though (and no slight intended for Chris), was to 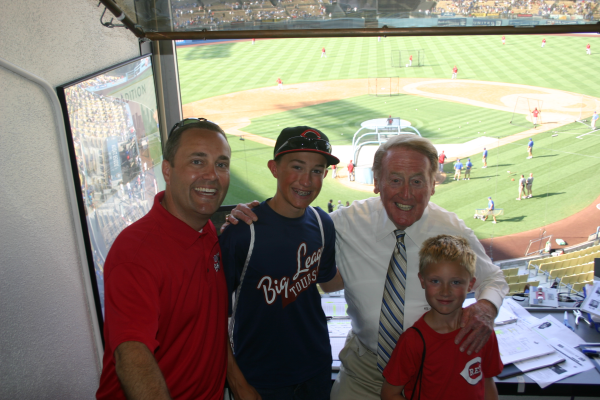 meet the voice of baseball, Mr. Vin Scully. As we were exiting the visiting team's booth, Chris introduced us to Mr. Scully who graciously spent a few minutes talking with us. It was surreal to be talking with the man who I've listened to all of my life calling the Dodgers games.

Here we are with Mr. Scully, in the Dodgers broadcast booth. What a fantastic time. Thanks to Chris and Mr. Scully for making our visit so memorable!

Check out the Game Summary on MLB.com.

Should Tommy John Be In The Hall of Fame?

One of my favorite things about our baseball tours is to offer our guests the opportunity to meet former Major League Players, hear them tell stories about their big league careers, and to get a chance to interact with them, asking questions and getting pictures and autographs. Maybe I like offering that to our guests because I enjoy that myself? In fact, I'm sure it is. I had a chance to do just that yesterday.

Beacon Orthopaedics & Sports Medicine, led by Dr. Tim Kremchek, sponsored an event held at the Green Diamond Gallery in Cincinnati and brought in Tommy John to speak. Mr. John was a Major League pitcher from 1963-1989, pitching for six different teams, but is probably thought of more as a Dodger or Yankee more than any other team affiliation. John posted multiple 20-win seasons, was a four-time All Star, and was a member of several playoff bound teams. He finished his career with 288 wins.

What's even more amazing about his career is the fact that, in the middle of his 26 years, he underwent experimental surgery to repair damaged ligament in his pitching arm, not knowing if he'd ever be able to pitch again. Mr. John told us yesterday that he first hurt his arm going from Little League pitching distances to Major League distance in his freshman year. That year he played first base and didn't pitch much. He continued to pitch with pain in his arm until he ultimately couldn't pitch any more and had the surgery.

This surgery was so successful that it has become very commonplace in baseball. In fact 1 out of 9 Major League pitchers will have the surgery. One in 9! This has extended the playing career of many great pitchers and even position players.

Posted by Big League Tours on Tue, Nov 22, 2011 @ 07:30 PM
Janurary 1, 2009 - Check out this premier sports travel package that will offer you games at three different stadiums in one long-weekend tour vacation. We'll start with former city rivals when the (Brooklyn) Dodgers host the Bronx Bombers at Dodger Stadium. Dodger dog anyone? Yes, please! The next day, we'll head across town to the site of the 2010 MLB All Star Game, Angel Stadium.

The final day of the tour vacation offers a free day in San Diego to hang out in the Gaslamp Quarter, head over to Coronado Island, or take one of the small group tours down to Tijuana. As long as the team's schedule allows, we'll head over to PETCO Park for a private stadium tour.

Come into Los Angeles early or stay a few days after in San Diego for family tours of sites in those great southern California cities. Head to our site to check out the details on this tour and all the 2010 Tour Vacations that we have to offer.
0 Comments Click here to read/write comments

Posted by Big League Tours on Tue, Nov 22, 2011 @ 12:00 PM
March 11, 2009 - Our East Coast 2 Tour, which runs over the first weekend in June of 2009, begins in New York City for a Friday night Yankees game at New Yankee Stadium. (I can't wait to get back to Manhattan or to get out to the new stadium.) We'll catch the new division rivals Rays taking on the Yankees.

of Fenway Park, an afternoon to hang out on Yawkey Way, and then take in the Red Sox game. Who else is in town but Josh Hamilton and the Texas Rangers. I can't help but wonder if some of his home run blasts in the All Star Game last year would have cleared the red seat in right field at Fenway? Maybe we'll get to see him do it in person?!

Joining us on this MLB tour is pitching ace, John Tudor, who was drafted by the Boston Red Sox and began his career in Boston. His most notable season was in 1985 when he started 1-7 and then went on a tear of 20-1 to finish the season. John also recorded 10 complete game shutouts that season, a record that hadn't been touched since 1975 when Jim Palmer reached the same peak.

Tudor was a member of the Los Angeles Dodgers in 1988 when they won the World Series against the Oakland Athletics. He finished his career with a 117-72 record, 988 strikeouts and a 3.12 ERA.

Check out our website for more details about this and other exciting  small group tours offered by Big League Tours.
0 Comments Click here to read/write comments