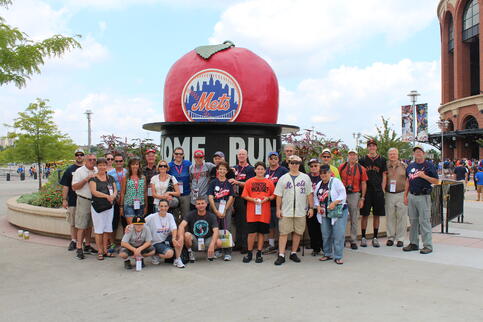 As you can imagine, after hosting baseball tours for 15 seasons, we get to meet some great folks. Marie T. is certainly one of them and has been a faithful traveler with us for quite a few years. Marie, from Upstate New York, first traveled with us in 2007 on a West Coast Tour. Since then, she has been on 4 tours with us and has plans to travel again with us in 2020!

Marie shared one of her favorite things about traveling with Big League Tours. "I like the fact that I am in the company of other baseball fanatics! Despite our different team loyalties, we share a love of the sport which makes for camaraderie and in some cases, lasting friendships." 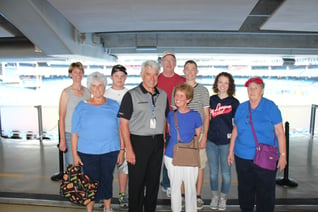 Marie told us about her favorite memory from a Mideast Tour. "In Toronto, Buck Martinez gave a memorable behind the scenes experience of the workings of the broadcast booth and it gave a lasting appreciation of the difficulties and challenges involved in televising the games. We probably take the broadcasting of games for granted and I doubt we would if we had any knowledge at all of what was required! I know I no longer do!" Marie is pictured next to Buck at Rodgers Centre in Toronto.

Marie had a few things to say about the experiences Big League Tours provides. "I would recommend Big League Tours because of the extraordinary customer service. We stay at first class hotels, we always have excellent seats at the game. The guides are always friendly and concerned about ensuring that our experience is a positive one."

She went on to say, "I highly recommend Big League Tours for anyone whose 'Bucket List' includes visiting all the Major League ballparks. It facilitates attainment of the goal by removing all the nightmares of how to get from place to place - getting hotels - getting tickets etc. It is a first class way of attaining your goal!"

We are thankful for Marie and having the privilege of hosting her for so many tours. (We love them as much as you do, Marie!) If you're wanting to check the MLB ballparks off your bucket list too, join us for a tour in 2020!

At Big League Tours we have the privilege of getting to know some great folks while out on the road and there are many guests who have travelled for many years with us. John R. from California, is one of those guests. John first traveled with us in 2014 and has taken four tours with us since then. (And already has two booked for 2020!)

John shared a little about his first experience. "I certainly remember the trip.  It was the East Coast tour that included a trip to the Baseball Hall of Fame. I took the tour with three of my golfing buddies, all of whom love baseball as much as I do, having both played and enjoyed it as a spectator.  We all loved the Hall of Fame experience, and being from Northern California (Sacramento), I’ll never forget the Barry Bonds record setting baseball; the one with the inked in asterisk." 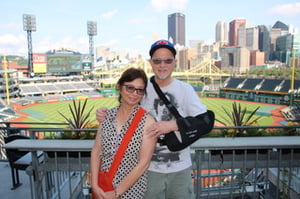 Some of John's favorite memories include:

As a faithful guest for 6 years, John had a lot to say about the experience Big League Tours provides. "Big League Tours is a baseball tour that is certainly set apart from other travel experiences. On a BLT, it is a mix of you being taken care of, and also you make your own travel arrangements, which I liked, because I could take advantage of discounts on some of the major airlines."

John went on to say, "In the big league cities you visit, you always stay in a top notch hotel not far from downtown or the stadium. There is free time for experiencing the cities, and I really like that. In New York City, our hotel was within walking distance of both Times Square and the United Nations headquarters.  We had a day on our own in New York. Also, the seats you get on a tour from BLT’s are really top notch. They are between first and third base, and always in the lower bowl. When I first researched baseball vacations, the website for BLT was way above in quality those of other companies. I could tell from the beginning that I’d be in good hands and have a great fan and tourist experience."

When asked why he would recommend Big League Tours to someone, John shared, "This business is really a class act.  If you want a great baseball experience, BLT’s is for you. You might be able to find cheaper tours, but if you really want to get 'inside baseball,' pay a little extra and let these people give you a great experience!"

We are thankful for our guests like John who have enjoyed these last 15 seasons as much as we have. Now’s the time to join us for the ultimate baseball tour and have the experience for yourself!

We know one thing about people who purchase a Big League Tours package, they love to travel! Something else we know; travelling the world can’t even prepare you for what New York City will throw your way. With two ballparks and countless other baseball attractions, it’s crucial to make sure you know the best way to explore the city before you head out on your own.

Using public transportation is a MUST:

Ride the subway at least once! 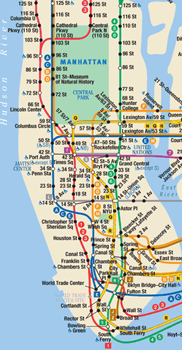 When you first enter a station you’ll want to purchase a MetroCard from a self-service machine. Fares are (as of 9/25/12) $2.25 each way and usually allow you to switch lines without paying another fee, just make sure you don’t exit the station. I would recommend a minimum of $5 every time you add money to your card in case of an emergency. MTA is the subway system in NYC and the fastest way to get from point A to B.

Now that you’re inside you’ll look for the colored circles with the number or letter of the line you want to take. Subway lines are color-coded depending on where they go and you’ll want to pay close attention to if the signs say “Uptown” or “Downtown”.  Uptown heads north and Downtown south. If you aren’t travelling to Queens or Brooklyn, these are the main things you’ll need to know about directions. If you accidently get on the wrong train, exit at the next stop and consult a map on how to get back to where you were.

Subway doors close quickly so make sure you’re ready when the train arrives.

NOTE: If you have an iPhone, maps will provide you with which line you should travel to get to your destination.

Directions to Yankee Stadium from the Grand Hyatt Hotel

-Take the 4 Subway towards Woodlawn (Uptown)

Hail your first cab in NYC.

You’ll see cabs everywhere you look; it really is just like the movies! Be aggressive because they’ll take advantage of tourists without thinking twice!

So here’s how it works… Cabs with their lights on are available, just step off the sidewalk, stick out your arm, and they will come. Hailing a cab from a sidewalk may make them think you’re unsure. Be aggressive and you shouldn’t have a problem.

When giving your location to the driver, it’s important that you seem very sure of where you’re going so they don’t try and take you the long way.

For example, say you’re trying to spend your afternoon at the Bergino Baseball Clubhouse to grab a few souvenirs. Try this:

I’m headed to 11th Street between University Place and Broadway.

This way the driver knows that you know exactly where you want to go.

Throw on your walking shoes.

Walking in New York City is the best way to take in the sights as you travel to your destination. It also gives you some time to people watch. The concierge desk always has great directions but don’t forget to grab a map just in case you end up somewhere you hadn’t planned on!

So there you have it. My main suggestions for exploring NYC like you've been there a dozen times. They may seem simple but it’s easy to get lost in a city of more than 8 million people. New York City has an endless amount of baseball destinations outside the stadium; take advantage of them without getting lost!

Check back in the next few weeks to see a list of our 2013 Tours and get signed up for the trip of a lifetime in one of America’s most exciting cities!