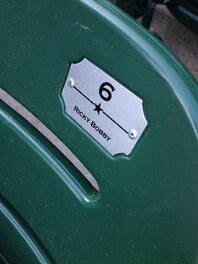 Our touring season kicked off in April with our Southwest and Sunbelt Tours. Although different in a few ways, the tour itineraries overlapped in Dallas and Houston. The Southwest Tour 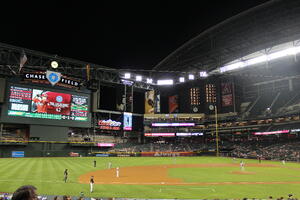 One reason we planned this tour so early in the season was to beat the heat, hoping to see the roofs open in the domed stadiums. We had pretty good luck all across our tour. We had a beautiful night in Phoenix at Chase Field. The night didn't go so well for Bronson Arroyo and the Diamondbacks, but our fans had a great time, nonetheless. (MLB Game Summary)

We've hosted tours in Phoenix at different times in the baseball season. When it's 110 degrees, you're thankful for the roof and air conditioning. But we love to see baseball outdoors, don't you? We enjoyed being at Chase Field with the roof open. It was a much better experience. We highly recommend going early or late in the season in hopes of seeing the roof open.

Time is running out to book your early season baseball tour! 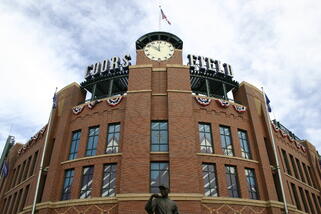 There is still time to book your early season tour and get 5% off the regular price on selected tours. But, hurry, all of the early season tour specials will end on Jan. 31, and we will be closing the reservations for our Sunbelt and Southwest Tours on Feb. 1.

When you travel with Big League Tours you will sit in some of the best seats in the ballpark, stay in the finest hotels, have time to explore the sites and enjoy spending time with a former Major Leaguer during our Big League Player Experience*. No other tour company does all of that. I hope you will join us on Big League Tours luxury baseball experience in 2014.

Our April and May Tour specials are good until January 31. Use coupon code EARLY when booking to get your discount. Here's the link to our Early Season Tour Specials:

Call or email with any questions.

We are offering new discounts on two of our early season tours. Book by Dec. 31 and get $100 off per person on our Southwest and Sunbelt Tours. Both tours will give you the chance to escape the cold weather and catch games under the warmth of the spring sunshine. Links to both tours are below. Use discount code SPRING when booking your tour.

Our $150 off per person on our 7-8 night tours continues through Dec. 31 as well. Use code HOLIDAY to get your discount. Here's a link to our blog that has all the info on this promotion. BIG LEAGUE TOURS HOLIDAY PROMOTION

* Not valid with any other offer or discount. Discount is only available on the tours listed above. No prior sales. Offer ends Dec. 31, 2013. Tips for Planning your Baseball Tour Download our Top 10 Planning Tips to help plan your 2014 Baseball Vacation. We have included tips for choosing your tour, plus some ideas for making the most of your time on the road. We put this list together based on our experience offering baseball vacation packages and guiding baseball fans through the USA . Whether you have already purchased your tour, or are considering purchasing a baseball tour, these tips are for you. Just click the link below and enter your name/email address to have access to the Top 10 Tips.

Our early booking special continues through Dec. 15. Book by Dec. 15 and save 5% off your tour package. Just use discount code EARLY when booking your tour. 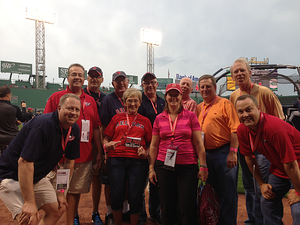 fans have been checking out our website, downloading brochures, sending in questions, and booking their luxury baseball vacations. If you haven't selected your tour yet, here are some reasons to book early.
Here's the link to the 2014 Tour Page. Make sure to scroll down once you are on the page to see all the tours.
2014 BIG LEAGUE TOURS
I hope you will join us on a luxury baseball vacation in 2014. Please call or email with any questions.
0 Comments Click here to read/write comments

A Sneak Peek at our 2014 West Coast Tour June

Our 2014 season is really starting to come together. Glenn and I have been scouring the MLB schedules to find the best combinations of games and stadiums for our tour packages. We are really excited about our West Coast Tour in June. It features the Rangers and Red Sox on the road, and we were able to add Seattle on the last day of the tour for a "FULL" West Coast experience.

We are offering the tour in condensed versions, too. You can choose the California Gold, Southern California, or Baseball on the Bay, if you want a shorter vacation.

Here are the links to the tour pages for all of the West Coast Tours in June. This is a special Sneak Peek for the fans in our database. These pages are not available to the general public, so you will have to get to them through these links. Thanks for taking a look.

2014 Baseball on the Bay Tour June

All of these tours are available for purchase right now. So if you would like to join us, just click the PURCHASE THIS TOUR button on the webpage.

If you have problems navigating, or have any questions, please feel free to call or email me.

The new Marlins Ballpark was opened in 2012. It was the first new Major League ballpark since the Twins' new facility, Target Field, opened in April 2012 in Minneapolis. If you had ever gone to a Marlins game at Dolphin Stadium, you knew it would be great if the team had a facility that was dedicated to baseball. 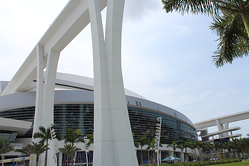 Unlike Dolphin Stadium, which is right off the interstate and very easy to get in and out of, Marlins Ballpark is tucked into a neighborhood that makes it harder to get in and out of the game. For this visit, we were headed to the ballpark not as a group tour, but just as a family tour. We paid for stadium parking in advance, which at least eliminated our concern about where to park. It didn't help us get out any faster, though.

The outside of the ballpark is very space-age looking. The columns in this picture support the roof when they open up the stadium. There was a threat of thunderstorms when we were there so they kept the roof closed. 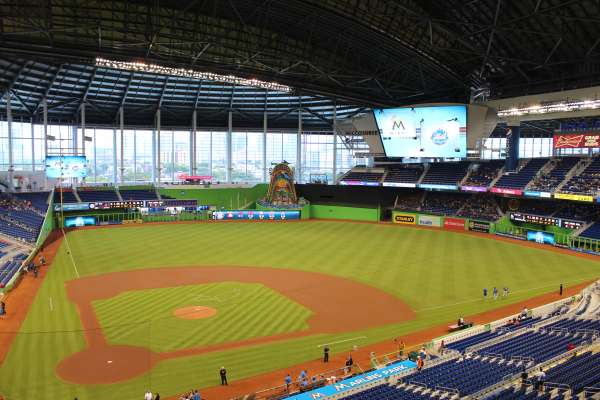 Inside, the park carries the sites and sounds of Miami throughout - Latin-influenced and very colorful. Even the smells in the stadium were different than others because of the wide range of food offerings.

My overall impression? It's a much needed improvement over Dolphin Stadium to see a baseball game. My opinion is undoubtedly tainted in that I don't like watching baseball games under a roof. I understand the reason for it, but I think it kills the atmosphere of a game that's supposed to be played out doors. (My opinion is the same of all dome or retractable roof stadiums in the Majors...)

What could have helped? If the roof would have been open, I'm sure it would have influenced my opinion. If the ballpark had been built in a neighborhood that either grew up with it (think Fenway Park or Wrigley Field) or had developed around it (think Coors Field or Camden Yards), then it could have been a better experience. (Once you go in doors, though, it doesn't really matter.) The locals will tell you that fielding a better team would make all the difference in the world. I can't blame them...

Without any new ballparks under construction anywhere in the Majors, Marlins Ballpark will remain the newest park for the next several years. If you're planning to make a trek to Miami for a game, my suggestion would be to go at night (hoping the roof will be open), choose an opponent with a large road following (so there will at least be somebody's fans in attendance), and give yourself plenty of time to get in and out of the ballpark.