Our guests will arrive in Cincinnati on Wed., July 18th to check into the hotel and prepare for their luxury baseball vacation. On Thurs., we'll head over to Great American Ball Park for an early afternoon game with plenty of time after to visit the Reds Hall of Fame and Museum. Cincinnati area sportscaster, Will Chambers, recently blogged about his favorite things at GABP. Here's a link to that blog post Will Chambers on Great American.

Friday morning takes our tour up to Detroit to see Prince Fielder and the Tigers battle the White Sox in an evening contest. We're off to Cleveland the next day for the Indians game at 7:05PM. We plan to arrive in Cleveland with plenty of time for you to visit the sites before the game. Want to check out the Rock and Roll Hall of Fame? Just ask your tour director to help make the arrangements.

Finally, our tour ends in one of our favorite ballparks- PNC in Pittsburgh. Here's a link to a blog by SI.com writer Will Carroll about PNC- Will Carroll on PNC Park.

As always, you can expect a Big League Player experience, lower level seats, first class hotels, sensible itineraries and all the BLT extras. CLICK HERE for the complete info on the Midwest 2 Tour. A printable/shareable brochure is available for the Midwest 2 Tour.  Click on this link MIDWEST 2 BROCHURE to get access to the brochure.

Book the Midwest 2 Tour by the end of the day on Feb. 8 and we'll buy you dinner* at the Palomino Restaurant and Bar in Cincinnati after the game on July 19th. Just use the coupon code DINNER when purchasing your tour. Ready to purchase your tour? Here's our RESERVATION PAGE. 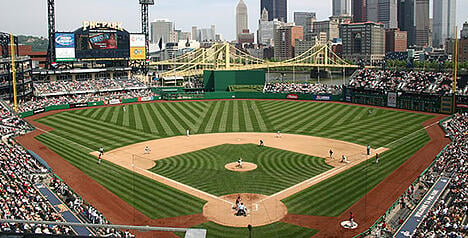 Our Take on Turner Field

Posted by Big League Tours on Wed, Nov 23, 2011 @ 12:45 AM
May 22, 2010 - We've had a chance to see most of the stadiums in the major leagues either on our family tours and on the baseball vacation packages that we offer. This trip was to Atlanta and Turner Field (or "The Ted") for a two-game stand. It was great to get to see the stadium for a night game and a day game. Sometimes the stadiums have two completely different personalities based on the time of the game.

We stayed in downtown Atlanta so the stadium was only a 1.5 - 2 miles from our hotel. The

concourses were really wide and made getting around the stadium very easy. Here's a photo taken from right inside the centerfield gates. As you can see, there is a ton of room for getting people in and out of the stadium.

The Ted also has plenty for kids to do at the park. The Cartoon Network Fun House offers a break for the kids as does the many different batting cages and pitching booths that they have all along the third base side. They also offered face painting which seemed apprapos given the team's mascot.

The concourses around the outside of the stadium reminded us of Jacob's Field in Cleveland. (I'm sure that should be said the other way around based on when the stadiums were built but we were at the Jake first...) They were easily maneuverable but, they do cutoff your sight lines to the field.

We weren't knocked out by the food, either. We were sitting in the premium seats so we were able to order and have it delivered to us. The menu was your basic ballpark food but nothing that really stood out. We've grown accustomed to local restaurants or foods being incorporated into the ballparks like the Primanti Brothers in Pittsburgh or the Montgomery Inn in Cincinnati. Or the other thing parks have done is include former players into the mix like Boog's Barbeque in Baltimore, El Tiante's Cuban Sandwiches in Boston, or Bull's Barbeque in Philadelphia. All great features that represent the team well. We didn't find this at The Ted.

All in all, we had a great experience. It would be hard to beat the southern hospitality that everyone working at Turner Field displayed. So if you are looking for a place for one of your baseball road trips, I would definitely recommend Turner Field.
0 Comments Click here to read/write comments