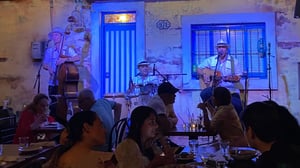 May is a great time to put on your flip-flops and enjoy the sunshine (and baseball) of the south! Our Southeast Tour starts in Miami, where guests take in a night game surrounded by the colorful Miami skyline at Loan Depot Park. Did you say Cuban food? We suggest long-time Miami favorites, Versailles or La Carreta, or check out a relative newcomer, Café La Trova (pictured), for fantastic food, drinks, and music. When they’re local favorites, you know they’re good!

Next, guests can unwind right by the water in beautiful St. Petersburg. We’ve added a free day, so you can enjoy the sunny views, shopping and growing food scene before taking in a game at Tropicana Field.

The Southeast Tour winds up in Atlanta, with the unique, all-American experience of Braves baseball. The youngest of the MLB stadiums, Truist Park provides a great atmosphere for a game, and the sights, sounds and tastes of Atlanta never disappoint. 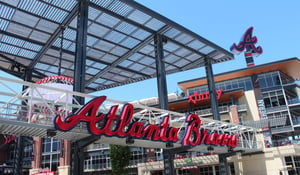 About Big League Tours
Big League Tours helps fans get closer to the game by securing lower level seats, arranging stadium tours and player experiences, and providing first-class hotel accommodations. Flexible itineraries allow fans to experience the best of the best in the greatest baseball cities across the nation. Unlike other tour companies, Big League Tours not only takes care of the buses and games for a baseball tour, but also provides extras that turn tours into true sports vacations, loaded with unique baseball-related events. For more information, contact Big League Tours at www.bigleaguetours.com.

Posted by Big League Tours on Wed, Nov 23, 2011 @ 08:15 AM
April 9, 2011 - You've gotta love Opening Day/Night at any baseball stadium. It's a time to celebrate the franchise's past, especially its most recent accomplishments. It's the start of a new baseball season and signifies new beginnings and opportunities for players, fans and teams.

And the atmosphere is electric as fans are so happy to be attending the first game of baseball in their home town.

Last night was no different in Atlanta. The ceremonies included the unveiling of their 2010 Pennant in center field for clinching a wild card playoff berth. It also featured former skipper, Bobby Cox, throwing out the ceremonial first pitch to his successor, Fredi Gonzalez. Ol' number six got a huge (and very fitting) ovation at Turner Field when he was announced and walked onto the mound.

We also witnessed a piece of history. Chipper joins lined a base hit to left field for his 2,500th hit of his career. That was great to see for a player who has been around so long, made huge contributions, and has meant so much to this team. Here's a photo of the historic hit taken from our seats. (We like to throw those in for free on our MLB road trips whenever we can!!) Here's the Braves wrap-up of the game.

The final game of the first of our baseball tours is this afternoon with the Phillies and Braves again.
0 Comments Click here to read/write comments

We Flipped for Flip Burger Boutique

Atlanta, to visit the original Flip Burger Boutique. Flip Burger is the creation of Richard Blais, the most recent winner of Bravo's Top Chef (see my earlier blog).

The first thing you notice when walking in is that the "flip" theme is carried throughout the restaurant. You can see this in the picture to the left where the booths have an upside down set of seats and tables above the booth as part of the fixtures.

While this location was described as the more family oriented of the two locations and the other location as more electric, more for a younger crowd, the original location was plenty electric with club style music playing and flat panel tv's playing music videos.

The food didn't disappoint us. The burgers lived up to the billing of a "boutique." They were inventive creations with on top of very tasty beef burgers. I personally had the mushroom and swiss burger with carmelized

onions, horseradish mayo, and swiss cheese foam (which elicited the question from one person of, "what the flip is that?!").

My daughter and I decided to split some of the sides so that we could try a few different things. We ordered the fried pickles with buttermilk sriracha (which were amazing) and a portion of the candycane beet salad. The beet salad had lots of interesting flavors combined with it including licorice and goat cheese. It was a light complement to our burgers and (fried) pickles.

If you watched Richard on Top Chef at all, you've probably seen him use liquid nitrogen when making milk shakes. They use that method at Flip and make some really interesting shakes. We had two, the Cap'n Crunch shake and the Applie Pie shake. Easily the Cap'n Crunch was the better of the two.

Tonight, our MLB road trip takes us to the Opening night game between the Braves and Phillies at Turner Field. We're excited to see the match up between Cliff Lee and Tim Hudson.

If you are interested in joining us on one of our small group tours and experience great baseball with a lot of fun extras like Flip Burger Boutique, check out our 2011 offerings and sign up today!
0 Comments Click here to read/write comments

See the Masters in Augusta and the Braves in Atlanta

Posted by Big League Tours on Wed, Nov 23, 2011 @ 05:30 AM
February 2, 2011 - The first of our baseball road trips in 2011 will begin with two days at Augusta National, taking in a practice round and a competitive round of The Masters Tournament. Our guests will be able

to walk the hallowed grounds with their favorite pro-golfers in search of the illusive green jacket.

After a free day in Atlanta (can you say golf anyone?), we'll enjoy a couple of baseball games including the Opening Day ceremonies for the Braves as they kick off their first weekend homestand of the year against their Eastern Division rivals, the Philadelphia Phillies.

Friday's game is an evening game and Saturday's game is in the afternoon. That's a great way to see Turner Field at different times of the day. We'll have the evening free in Atlanta with plenty of time for dining or entertainment in this great southern city.

By now, you've come to know Big League Tours as the premier provider of baseball vacation packages. Check out all our 2011 tour vacations to see which one suits you the best.
0 Comments Click here to read/write comments

Posted by Big League Tours on Wed, Nov 23, 2011 @ 04:15 AM
November 27, 2010 - Big League Tours' sixth season of offering one-of-a-kind baseball tours will begin in April with a sports travel package that is making its first appearance on our roster - a tour that includes two days of the Masters tournament in Augusta and a pair of Braves games in Atlanta. This is just one of the unique additions that we've incorporated into our baseball tours this year.

In addition to seeing lots of big league baseball around the country, we've included some other sites into our tours like the Masters tournament, Niagara Falls, and Disneyland. Our tour vacations also provide free days in MLB cities, like San Francisco or Washington D.C., where you'll have time to visit monuments and museums in the nation's capitol making these great family tours.

Here's the schedule of our 2011 baseball tours:
Take a peak at the schedules, find which of the sports travel tours best fits your schedule, and join us next year for some exciting big league baseball and much more!
0 Comments Click here to read/write comments

After a Long Offseason, We're Back on the Road!

It felt great to finally get out on the road for the first of our baseball road trips of the 2010 baseball season. Yesterday we headed out to Atlanta to see the Braves and Reds in a two game series at Turner Field.

The Braves jumped out to an early lead but let the Reds get back into the game and tie it up in the top of the ninth. That just setup the scenario for Heyward to hit a walk off double driving in Prado for the winning run. Click here for the full box score.

Today we're headed out early to the Ted to explore the park, get some photos and hopefully a few autographs and baseballs. More from our small group tours later!

Posted by Big League Tours on Tue, Nov 22, 2011 @ 06:00 PM
December 15, 2009 - We're going to open up the first baseball tour of our 2010 season in Atlanta, Georgia. We'll head down south in the middle of May before things get too hot. The Atlanta Braves will be taking on the Cincinnati Reds for a two game series and we'll be there for all the action.

We'll be staying in the heart of downtown Atlanta and traveling to the games via first class motor coach. The times haven't been announced for this series but we expect that the first game on Wednesday will be in the evening and that the game on Thursday will be an afternoon start. That should give us a different experience for both games at Turner Field.

As the team finalizes the schedule, we'll be able to finalize some other elements of our itinerary. If possible, we'll be including a stadium tour of The Ted. And, as on all of our MLB Tours, we'll also be adding a Big League Experience by bringing in a baseball player, media personality, or front office personnel to give us an inside view of the game.

Head to our site to check out the details on this tour and all the 2010 Tour Vacations that we have to offer.
0 Comments Click here to read/write comments