Posted by Big League Tours on Tue, Nov 22, 2011 @ 11:15 AM
February 18, 2009 - Each year, Big League Tours offers sports packages to baseball stadiums all across the Major Leagues. While we offer top of the line accommodations, lower-level tickets to the games, baseball stadium tours, and transportation, the highlight of the tours are always when we meet with current or former Major League players.

The Big League Player Appearances are shaping up nicely for the 2009 season. Here are the players that we have confirmed for our group travel tours: I'll be posting some information about each of these players and any updates that we will have including the players who will be joining us on our family tours in Atlanta and Chicago.
0 Comments Click here to read/write comments

New Citi Field is set to open in April 2009 and many escorted tours have really started selling!

November 24, 2008 - Citi Field will be a great place for baseball fans to catch a game. There is a more intimate atmosphere with the seating angled towards the infield and set down lower. The Mets and Citi Field have comissioned a statue of Jackie Robinson for when guests first enter the stadium and named Jackie Robinson Rotunda.

New Citi Field will be a great new addition to baseball stadiums in the United States. Check out what the new stadium will look like when it opens in 2009.


Don't forget to check out our website for all the baseball trips we are offereing to the east coast in '09!
0 Comments Click here to read/write comments

September 23, 2008 - At Big League Tours one of our favorite stops is heading out to Queens to see the Mets. Most people don't go to see the stadium per se, but rather to just plain and simple see a Mets game. In 2009, we will head out to Citi Field to see a beautiful ballpark and a great game.

Here are some great memories at Shea Stadium:

April 19, 1964: Al Jackson pitches a six-hitter in the Mets' 6-0 victory against the Pirates, their first victory in the new stadium.

Aug. 15, 1965: Shea rocks. Greeted by a shrill din produced by 55,600, mostly teenage girls, that made their performance impossible to hear, the Beatles change the music world again, presenting a concert on the largest stage ever.

Oct. 6, 1969: With Nolan Ryan pitching seven innings in relief, the Mets come from behind to beat the Braves to sweep the first National League Championship Series.

1969: “Miracle” Mets are considered one of the most improbable champions in baseball history. They trailed by 9.5 games in mid-August, yet won the division and the National League Championship Series before upsetting the Baltimore Orioles, who had won 109 games, in the World Series.

Aug. 6, 1970: Nine days before the first anniversary of Woodstock, Jimi Hendrix and Janis Joplin headline the Summer Festival of Peace.

May 6, 1983: With the Mets floundering in fifth place, Darryl Strawberry is promoted to the big leagues. He goes hitless with three strikeouts in four at-bats, walks twice and scores the decisive run in the Mets' 13-inning, 7-4 victory against the Reds.

July 28, 1993: A ninth-inning double by Eddie Murray drives in the decisive runs in a 5-4 victory against the expansion Marlins that ends the record-setting losing streak of Anthony Young at 27 games. Young had allowed the Marlins to take the lead in the top of the ninth. The Mets bottom out with 103 losses, equaling the most ever by an established team in an expansion era, at the time.

April 15, 1998: Straw returns. With Yankee Stadium closed for repairs, the Yankees play the Angels at Shea. And their designated hitter, one Darryl Strawberry hits a home run, his 127th at the park, still the most ever  .

Sept. 21, 2001: Bagpipes and baseball. The Mets engage the Braves in the first professional sporting event in New York to follow the attacks on the World Trade Center. The emotional evening climaxes with a two-run home run by Piazza in the eighth inning that creates the final 3-2 score.

Let Big League Tours know what your favorite memories are of Shea Stadium. Whether it's one from when you were there or any other.

September 18, 2008 - In a move never before seen this early, Major League Baseball released their complete 2009 schedules in mid-September. In past years, bits and pieces of the schedules would slowly come out from October through the end of the year and would be finalized in January. When we read the announcement that the schedules were to be announced, we expected to know when the Mets and Yankees were going to open their new stadiums and maybe to find out about a few other events. We were blown away to see every game for every team is available, today! Honestly, it felt like Christmas morning!

So now we're in the throws of putting together our 2009 baseball vacation packages and the slate is wide open. Where you would like to go? When do you want to travel? What do you want to see this year? We would love it if you would share your thoughts. Drop us a comment to let us know.

Now the tough part is waiting until the trips actually get here!!! 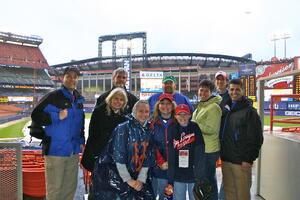 postponed. That day finally arrived. After dodging rain outs all across America for a couple of years, we suffered our first one at Shea Stadium. All wasn't lost, though.

Part of the attraction of MLB road trips is to see the stadiums. While it was raining most of the time we were there, we were still able to walk around and see quite a bit of the stadium. In fact, it was quite nice. Most of the fans stayed away from Shea so we were able to check it out without fighting a large crowd. We essentially turned the time into our own baseball stadium tour. In addition, you could clearly see the new stadium, Citi Field, from inside the old ballpark. Here are some of the folks from our group. That's Citi Field in the background.

About half of the guests on our package tour were staying an extra night in New York City and were able to return to Shea to see the game (and it was a gorgeous day!). Unfortunately for me, I wasn't one of those lucky enough to see the game...

In my opinion, seeing Shea Stadium isn't worth a trip on it's own. If you are going as part of a baseball vacation package or baseball road trip of your own that includes other baseball stadiums, then it's worth making a stop. If nothing else, it will give you a greater appreciation for the new stadiums that are built with the fans in mind.
0 Comments Click here to read/write comments

May 9, 2008 - One feature of our baseball road trips that is almost always the highlight is when we bring in former MLB players for our Big League Player

Experience. This baseball trip was no different. Joining us in New York was Art Shamsky, member of the '69 Miracle Mets team that won the World Series just a few years after the franchise was created. Here is Art (in the middle) pictured with a couple of our guests.

Art shared stories of breaking into the big leagues (in the minor leagues they traveled between cities in station wagons with 8 guys per car, 2 of them facing backwards!), related his experience as a player during the 60's and 70's, and discussed issues relevant to baseball today. Our guests on this small group tour were able to ask questions of Art across many different topics as well as receive autographs and take pictures with Art.
0 Comments Click here to read/write comments

Posted by Big League Tours on Thu, Nov 17, 2011 @ 04:00 PM
May 1, 2008 - One of the things that I love about our MLB tours is that we include some features that aren't on any other baseball travel tours available. One of those features is what we call our Big League Player Experience. It's where we bring in MLB players to meet the fans traveling with us, share stories about their playing careers, answer questions, and sign autographs and get pictures with the fans on our small group tours. It's an opportunity to get an inside look 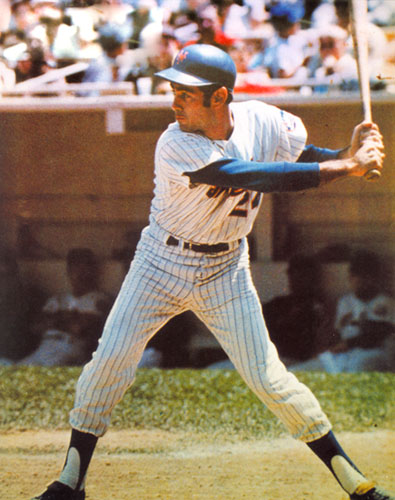 into baseball and meet some of the players that we've grown up watching.

Our upcoming trip to New York City is no exception. On this baseball trip, we're going to be joined by Art Shamsky, a member of the 1969 World Champion New York Mets. Here's an excerpt from his biography:

In 1965, Shamsky made the Cincinnati Reds and hit .260 as a backup outfielder. He batted .289 as a pinch-hitter that year. In 1966, despite getting only 272 plate appearances for the, Art was second on the team with 21 homers, trailing Deron Johnson by 3. He homered four times in four at-bats from August 12 through August 14, tying a Major League record. On August 12, Shamsky became the first player in Reds history to hit two extra-inning home runs in one game and the only player in Major League history to hit 3 home runs in a game and not be in the starting lineup. The bat that he used to hit the four home runs in a row is on display in Baseball's Hall of Fame.
During the winter of 1967 Art was traded to the New York Mets and was part of the Miracle Mets that won the 1969 World Series. Art hit .300 that season and batted .537 with 7 hits in 13 at-bats against Atlanta in the National League Playoffs. The 1969 Mets are still recognized as one of the most remarkable stories ever in professional sports. After 13 years in pro baseball and with a World Series ring Art retired from baseball in 1973.
In his post baseball career, Art has been involved in numerous business endeavors and was a radio and television broadcaster that included the New York Mets in 1979, 1980 and 1981. In 2004 Art's popular book, "The Magnificent Seasons', was published.

To read more about Art Shamsky, click here to be taken to his website. Or, if you would like more information about other Big League Player Experiences offered on our baseball vacation packages, visit our website or give us a call!