Posted by Big League Tours on Sat, Nov 19, 2011 @ 12:00 PM
Starting August with a Sports Vacation by the Arch
August 1, 2008 - No summer would be complete without baseball trip to catch some baseball in the true baseball town of St. Louis. To make it even better, St. Louis is taking on the Philadelphia Phillies and both teams are battling for

spots at the top of their divisions. We suspected that the baseball would be hot and knew there would be a good chance that the weather would be hot in St. Louis in August. We were right about both things.

Our seats were fantastic - this game they were in the club seats behind home plate. When we arrived to our seats, the Phillies were wrapping up their batting practice. We were able to snap this photo of Ryan Howard from our section.

The Cardinals dominated the game by posting a four-run third inning and holding the Phillies to only three runs. Click here for the complete box score and to read the Cardinals' write up.
0 Comments Click here to read/write comments

Congratulations to the St. Louis Cardinals

What an amazing finish to the 2011 MLB 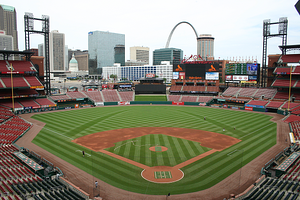 season! One of the most improbable scenarios played out in front of our eyes. The Cardinals were 10.5 games back in September and came all the way back to capture the World Series title for the 11th time in franchise history. Click here to see the box score and video wrap up on MLB.com.

One thing that we have found on our baseball tours, St. Louis is a baseball town - the team, stadium and fans are all top notch. It's always a favorite stop for our travelers on their baseball vacation packages.

As we put together our 2012 baseball tour packages, we'll be looking to head to St. Louis on a Midwestern tour. If you want to visit Busch Stadium or see the Cardinals on the road, sign up for our newsletter to be the first to know the details of our tours!