The 2021 tour season was extra special. Partially because we FINALLY got to go to MLB games, but also because we celebrated guests visiting their 30th stadium. Sandy C. and Jill R. marked #30 off their list this past August. Here's what they had to say about their experience:

"Growing up baseball was always a part of life. We grew up 60 miles north of Cincinnati and after attending games there over the years, we decided to branch out by going to a Chicago Cubs game. After that, it became the thing to do in the summer – go to a new city & see a new ballpark. After doing a total of eighteen cities on our own and with friends, it was time seek professional help. This brings us to our decision to travel with Big League Tours. Looking into where we wanted to go next was overwhelming. The logistics were mind boggling - the driving, the hotels, the tickets, the scheduling. We started looking into tours that would take us where we wanted to go. The biggest thing about BLT that stood out was the endorsement of Major League Baseball. Once we saw the endorsement, the itineraries that they presented, along with the hotels, transportation and the seat locations for the games, it was a no brainer.

included three more cities after our parks. We started in San Diego meeting our group in the hotel lobby and walking to the park. It was a small group with nice people from various parts of the country and two from Canada. We did a stadium tour that day and had great seats at the game. The next day it was Dodger Stadium, another tour and again great seats. Our last game of that trip was at the Angels game on Sunday. At the Angels game, we had seats in the shade in club level area with in-seat service. We stayed at top notch hotels & our tickets were in the lower seating bowl with the exception of Sunday. Our tour host, arranged for anyone in the group to go to a local Italian place for dinner on Sunday night and was very helpful with information on how to get to the airport when we left the trip on Monday, as the group was continuing on with the rest of the trip. It was so nice to leave the planning and arrangements to someone else, we started looking into the 2019 trips as soon as they were available.

When making the arrangements for a 2019 BLT trip, we encountered some issues and sent an email to them. Within 15 minutes, our email was answered on a Saturday night which was very impressive. Great customer service!!

Our next BLT trip was the Southeast Trip in 2019 with another small group including a couple from Australia. We stayed at a beautiful hotel in Miami with a balcony and great view of the cruise ships docking and Miami Beach across the bay. Once again, great seats at the ballpark. Next we traveled to Tampa Bay. The day of the game we were introduced to Dante Bichette, the former major league player. He gave us insight as to what it was like for him to play in the majors and also what it was like to raise a future major leaguer with his son Bo being in AAA baseball at that time. We took individual and group photos with him and he signed our Big League Tour name badges. We then took the trolley to the ballpark and sat 5 rows from the dugout. We saw the stingrays in the outfield tank and saw a fly ball hit the roof of the stadium and drop for a single. In Atlanta, we stayed within walking distance to 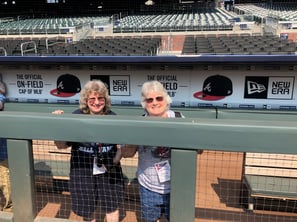 the park and took in another stadium tour. In true Atlanta fashion, it was a hot Sunday game. Our seats were on the Infiniti club level, with access to the indoor, air-conditioned food court, complete with TVs to keep track of the game. Our tour host, Martha Ellen did a great job making sure there were no bumps along the way and making sure everybody had their picture taken at all the ballparks.

After setting out 2020 for Covid-19, we signed up for the 2021 Southwest Tour. Again it was a nice sized group and there were a few familiar faces from the 2019 tour plus our tour host was another familiar face, Martha Ellen. We started in Phoenix within walking distance to the park. Our seats that night were in the player family section where we actually sat next to the mother of the Diamondbacks starting pitcher and behind the fiancé of the closer. It was interesting to talk with them and see how they view the game with it being their family member on the field. Next we were flown to Denver on July 3rd. From a rooftop lounge at our hotel we were able to watch the Rockies Independence Day fireworks! Sunday took us to the Rockies game against St. Louis. 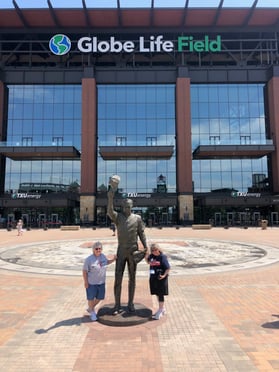 The next morning it was up early to fly to Dallas. The airport was quite busy, but Martha Ellen, made it as smooth as possible by getting us checked in as a group. We attended the Texas Rangers game that night, making sure to get our picture taken with the bigger-than-life Nolan Ryan statue outside the ballpark. We also did a stadium tour before the game and were able to watch batting practice. Next day we were on a motor coach to Houston with a stop at Buc-ee’s Convenience Store known for being the biggest type of convenience store in the US. We have to say it was a one of the highlights of the trip. Never had we seen such a huge place with so many different types of items. In Houston, we were seated with the entire group for the evening. Glenn was there for the game and presented our tour host Martha Ellen with a signed baseball, by the group, for attending a game at her 30th stadium.

We were down to our last stadium for our goal of all 30 stadiums. With an email to Bronte, and a quick response we were able to join the Midwest tour in St. Louis and then traveled to our #30 Kansas City with the group. This group was another nice size with some people who had also been on the Southwest Tour the previous month. St. Louis is a great baseball town and we really enjoyed the stadium tour, as well as their Hall of Fame and just walking around the area outside the ballpark. The game on Sunday was hot, but once again our game-day seats were in Red Bird Club Level, with access to the indoor, air conditioned food court, complete with TVs to keep track of the game and the weather, also a great place to sit during a 2-hour rain/storm delay! Kansas City Royals was our #30 and a big deal for us.  Our seats were in the 5th row from the field right behind the 4-row Crown Club in-seat service section, lined up with the home on-deck circle, looking down the left field foul line. These were the best seats we have ever sat in at an MLB park – Thank you BLT!!!  The game went into extra innings (11) before the Yankees won 8-6. The fact that it was 95 degrees with a heat index over 105 degrees also added to the memory. 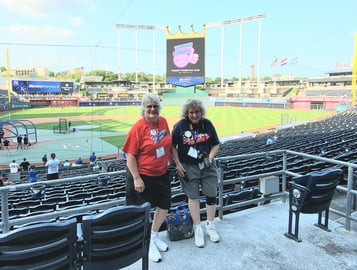 Congratulations, Sandy and Jill!! We are so glad to have played a little part in your accomplishment. Thank you for choosing Big League Tours!