Oakland Coliseum, or O.co as it's referred to, is rarely on anyone's must see 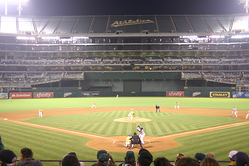 list unless you're either a diehard A's fan or visiting all 30 stadiums on your quest to complete your bucket list.

Local fans will tell you that visiting the Coliseum before the addition of "Mount Davis" was much more enjoyable. They're referring to the offices, suites and seating all along the outfield fence and visible in this picture. It gets its name from former Raiders owner, Al Davis, who had this addition made for the football season.

The complaint is that the ginormous wall cuts off the view that was once enjoyed of the community and the rolling hills in the distance. I personally hadn't visited the ballpark prior to the remodel so can't speak from experience.

I will say, though, that A's fans are great. They're not there for gimmicks or ulterior motives. It's about baseball. This made visiting the Coliseum fun even though I didn't have a dog in the hunt, so to speak. Everyone was into the game and having a great time. Maybe it's because they were thumping the Red Sox? Whatever the reason, our group had a great time in Oakland.

Here's the Game Summary on MLB.com.