Founder And Son Complete Their Bucket List, Assist Others In Their Quest

(INDIANAPOLIS—December 9, 2014) -- It all started with the phrase, “Before I die, I want to…” It was an exercise that Big League Tours Founder, Glenn Dunlap, completed in a men’s group study at his church. “The goal of the exercise was to help develop personal priorities in different areas of your life.” 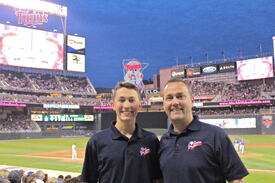 
Something Dunlap always wanted to do was visit every Major League Baseball stadium. Since he couldn’t hit breaking balls, his chances of seeing ballparks from the dugout had already passed him by. So he searched for a tour company that would help him fulfill his bucket list dream as a fan. When he didn’t find what he was looking for, he decided to launch his own company.

“After looking for companies that offered baseball tours the way that I wanted them, I started to realize that they didn’t exist. I kept thinking if you only visit each stadium once, you’d better do it right. Doing it right means sitting in great seats, taking behind-the-scenes stadium tours, meeting baseball insiders, and staying right in the heart of the MLB cities. Since nobody else was doing it that way, I began wondering if there were other people who wanted those same experiences.”

As it turns out, there were. Now heading into their 10th season, Big League Tours has hosted travelers from all over the world. Some want to see a stadium from their childhood or follow their favorite team. Some have the bucket list dream of seeing all the stadiums. But whatever their motivation, all are seeking a fantastic baseball experience.

One such traveler is Sheryl Malone, who has been on 5 trips with Big League Tours, visiting 28 of the MLB stadiums, 19 of them with the company. A Cleveland native, Sheryl has watched Indians greats such as Larry Doby, Bob Feller, Bob Lemon, and Early Wynn. She credits her grandma with introducing her to baseball at a very young age, but it doesn’t take long to realize that Sheryl’s whole family was influenced by the game. Her dad was a big fan, taking the family to games whenever possible, her sister is a Dodgers season ticket holder, and her late brother worked for the California Angels and the Cleveland Indians.

“I really like seeing the different architecture of the stadiums, what they have built up around them, with so many things to do,” Malone said. “I also love to meet all the people on the tours and to be with fans who really love the game. When you’re with a group of people with the same interests, you can root for different teams, but have great camaraderie.” Sheryl will celebrate her 30th stadium in Kansas City this summer with friends and family on a Big League Tour. 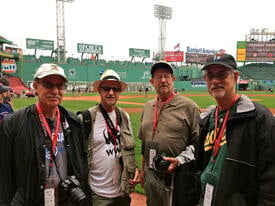 John Rosskopf (second from the left) and lifelong
buddies enjoy being on field at Fenway Park
while on their East Coast bucket list baseball tour.

John Rosskopf took his first trip with Big League Tours in 2014. John is a rabid baseball aficionado, having grown up watching his father pull weeds in the lawn at home with a San Francisco Giants game on and a transistor radio always close by his side. For the past twenty years, John has been attending San Francisco Giants games each year, both at Candlestick and AT&T Park, but didn't get the bug to see all the stadiums until he discovered Big League Tours with three golfing buddies.

"We were all very impressed with the whole experience...not just the baseball, but the great cities you are exposed to during these tours,” shared John. “Big League Tours gets the best hotels in these fabulous baseball meccas, and you travel with people who love the game too."

John had already been to the stadiums on the west coast, but the trip back east was definitely eye opening. "I never knew what a great time you could have in other peoples' parks with new found friends who love the game too. I definitely am going to take advantage of this great opportunity and see all the stadiums, as long as I am able to travel."

As for Dunlap, he and his son completed their 30th stadium together this summer. “It’s been an amazing 9 years of traveling together. We have a lifetime of memories that we’ll always carry with us. Completing our bucket list keeps us inspired to help others do the same.”

Big League Tours helps fans get closer to the game by securing lower level seats, arranging stadium tours and player experiences, and providing first-class hotel accommodations. Flexible itineraries allow fans to experience the best of the best in the greatest baseball cities across the nation. Unlike other tour companies, Big League Tours not only takes care of the buses and games for a baseball tour, but also provides extras that turn tours into true sports vacations, loaded with unique baseball-related events. For more information, contact Big League Tours at www.bigleaguetours.com.