You can’t beat the combination of one of the greatest cities in the world with two of the most spectacular newer ballparks in the Major Leagues. We’re excited to offer three nights in New York City on this early season tour. You will catch a game at Yankee Stadium and Citi Field with free time in between to explore the city. We have also included a Gray Line city tour for you to use during your time in the Big Apple. You will have premium seats for each game and enjoy all the other Big League Tours extras. Book now to hold your spot! 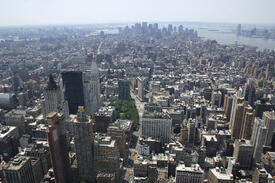 View of Manhattan from the
Empire State Building Observatory Deck.

"Great seats for all of the games.....first time to all of these parks...the ONLY way to go!"

**Player appearances, schedules, pricing, and other details are subject to change.**

Sign up for specials, discounts, and updates from Big League Tours.